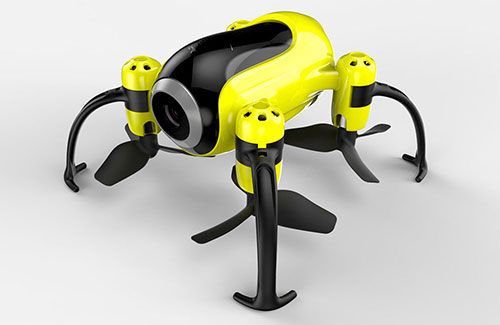 The UDI Piglet is a mini drone that is small enough to fit in the palm of your hand yet still packs a lot of the technology developed in its bigger drone counterparts. These features include altitude ...

Description
The UDI Piglet is a mini drone that is small enough to fit in the palm of your hand yet still packs a lot of the technology developed in its bigger drone counterparts. These features include altitude hold, phone control, heading hold, one button takeoff/landing and a built in camera. The futuristic upside down design means the landing legs double as blade guards for extra protection.

FlyingSee Phone App
UDI have developed an advanced mobile APP to work with the latest generation of UDI drones. It not only allows you to see the camera footage in real time and use that in FPV it also can control the drone in flight removing the need for a transmitter.
Android Download Link - IOS Download Link

Altitude Hold Mode
The Piglet comes equipped with an 'Altitude Hold' feature for easy and precise flying. The built-in sensors hold the drone at the height you are flying at to give you an even more stable quadcopter. If you move the throttle stick forward the Piglet increases it's height but when you centre the throttle the Piglet 'locks-in' at its current height until you tell it what to do! This make it easier for beginners and also makes for smoother video at a constant height.

Heading Hold Mode
If heading hold mode is selected at the beginning of a flight it can be a great aid to those learn to fly drones. When a drone faces a different direction the control directions normally change with it, this can make it tricky if you don't have much experience flying like this. Using Heading Hold mode you needn't worry as the Piglet keeps the controls the same whatever the direction of the drone.

Low Battery Alarm
The built in telemetry can alert you then your drone battery is running low on power. The controller will sound beeps as an alarm to and remind you to fly the drone back as soon as possible.

One Button Take off/Landing
As you get to grips with flying a drone often the takeoff and landing is the most tricky part. But using the 'One button' takeoff/landing feature this can be done automatically for you. Press once and the Piglet takes off and holds at a certain altitude, press again and the Piglet slowly descends until it has landed and then stops the motors.

Custom Flight Route Mode
Using the FlyingSee APP you have the ability to designate a custom flight Route Mode. Just draw a flight line on the mobile phone screen to set a route. The drone will fly according to the flight line * and is very useful for making smoother videos.
* Weather can affect the route and please ensure the flight area is clear of obstructions.

USB Charger
A USB charger is supplied for easy recharging. Simply plug into a standard USB port (such as a phone charger, power pack or computer) and connect the drone battery to the other end. A LED light will indicate when you are ready to fly again.

Virtual Reality Mode
Using the FlyingSee APP you can enter a VR mode which displays a split screen layout for use with UDI U-Scene VR goggles. This allows you to see what the Piglet can see in real time. Please refer to the VR user manual for more details, VR goggles and an Android or IOS smartphone is required. VR goggles sold seperately.

Note: An Android or IOS mobile device is required for use with the FlyingSee APP and is not included with this drone.
Spares
Downloads
Youtube